"Seventh House" in the Musical "Hair" 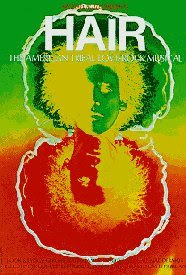 Maria Barron on her blog "The Sixties" asks "So what is the seventh house and all that?"

"The moon is always in someone's seventh house. It's in my seventh house for two or three days each month, just as it is in yours or anyone else's. Those are different days for different ones of us, depending on our moment of birth, but for each of us they signal pretty good times to fall in love. The seventh house in a person's birth chart is the house of marriage and partnerships, which are one-on-one relationships ruled by Libra. Aquarian relationships are 11th-house matters that are not one-on-one; they're 'One for all and all for one.'
"And what about Jupiter aligning with Mars? Jupiter rules Sagittarius while Mars rules Aries. Representing good fortune and willfulness respectively, Jupiter and Mars make a powerful conjunction when they come into alignment each year, but it's not a particularly Aquarian one.
"The root lyrical problem, I suspect, is that Aquarius is ruled by Uranus. And nobody can sing the name of that planet without cracking up."
Saw the current revival on Broadway. Highly recommended. The music holds up very well, and it's just as controversial and timely as the first time. The Canadian composer continues to work in relative obscurity.